A rebel turned to a mercenary. A revolutionary lost to oppression. A liberator doomed to ruin. 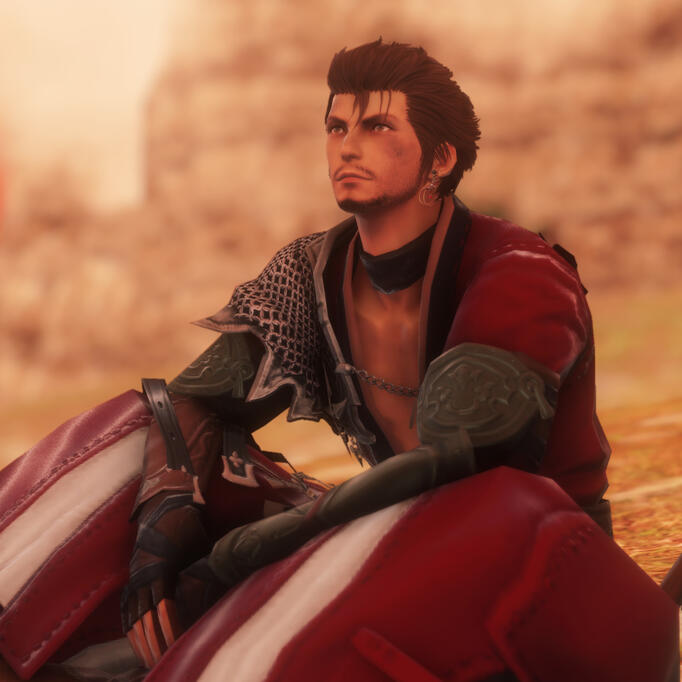 What stood out the most from him were his eyes: pale, deep pools of blue. The look in them were gentle and kind, but somehow also fierce and dangerous. They possessed the potential to lighten the heaviest of spirits, and waver the most fearsome of souls.

One of the most notable features of Johan is his scar: a thick line of roughly healed flesh beginning from the bridge of his nose and ending at the left side of his lower jaw. Physically, he takes after mostly from his mother: with deep blue eyes and brown hair, though some of the latter has greyed over in recent years. The side of his father, however, takes the form of slightly tanned skin, his above average height, and stern facial features showing a visage that most would call stoically handsome.

He retains a muscular physique which, besides the scar on his face, there exist other patches of marred flesh, most of them placed upon his back in the form of whip marks. On his front are smaller scars, made by cuts and nicks from blades, along with shrapnel from rogue bullets. His hands are calloused, made by years of hard labor and fighting. His face, for the most part is bearded, sporting a goatee connected on the sides by a small but thick line of sideburns.

Despite his weathered appearance, rugged features, and the occasional strands of grey hair lined atop his head, they serve to make him look more older than he actually is. In truth, he’s quite young, not being much older than thirty. However the scars, along with his ordeals, even his hair, tell an unknown story that has granted the Hyur a sort of wisdom beyond his years, though it was at a price that he deemed much too high. 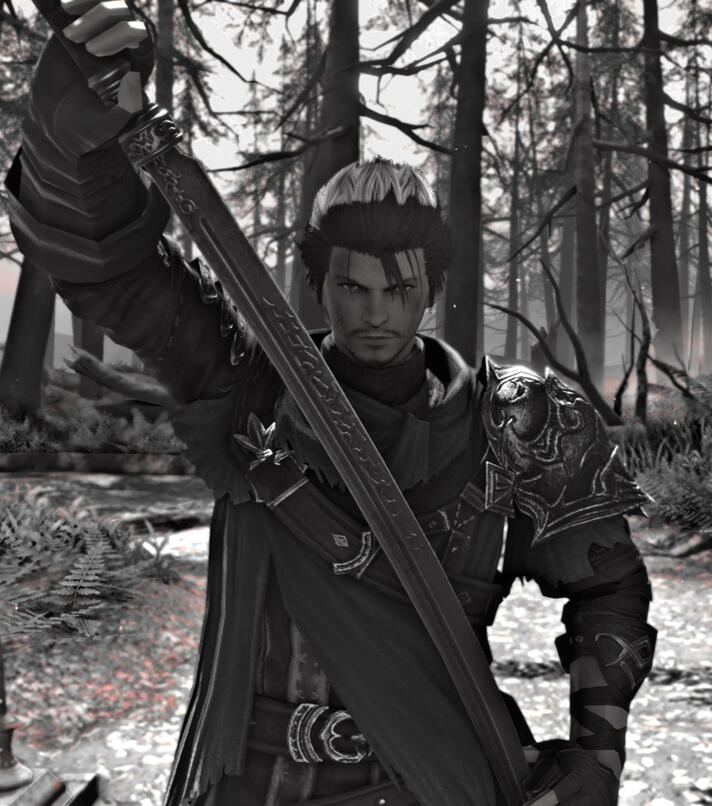 A Soldier Without a Cause

Matching his rugged appearance, Johan will come as gruff to most people. He’s a man of few words, not wishing to speak unless it is needed. When he does talk, his words are polite, but curt; usually being straight to the point, as he is not one for small talk. This isn’t because he abhors it; in truth such things escape him. Being around only his father and a select few others, both served very little in teaching him basic social graces. Despite his lack of talent in starting a conversation however, he can continue in one if it interests him. His time among the other realms, have especially served to opening him up to different social behaviors and culture, which in turn has made him something of a decent conversationalist.

When it comes to befriending others he is, for a word, resistant. Due to the few people in his life he was attached to being killed and meeting terrible fates, he makes little to no effort in making friendships, viewing them as unnecessary bonds and dangerous ties. At most, he keeps people away as little more than associates; as individuals who serve a purpose for him, and he in return to them. This can be described as something akin to a business transaction, which in truth fits and suits his needs perfectly. He is not immune to human relations however, and can be cordial, even friendly, to those that persist in getting to know him and who continue to force themselves upon him. Eventually, he may even grow fond of them, against his better judgment. To those that earn his friendship, he shows a great sense of camaraderie and loyalty to. Still, he prefers to keep his circle small and the majority of his relations distant, as he deems this an effective way of protecting others, and though he may never admit it to himself, an even more effective way of protecting himself from the pain of loss.

Johan is a fair but cynical individual; one who has seen and done much and has regretted even more. While he is not fond of injustice and evil, of cruel acts done in the name of lofty ideals and falsehoods, he has become disillusioned with the world, and has long since given up the idea of trying to make it better. He is patient and wise beyond his years, usually seeing ahead in comparison to those who see what’s only in front of them at the moment. He is not one to cheat others or hurt them needlessly but will respond in kind to those who treat him with such behavior. He isn’t one to spread hurt and chaos but if pressed, he will do so to those deserving.

While on assignment, his behavior is strictly professional. In contrast to his usual habit of refraining from conversation, he minimizes it absolutely. He makes no effort to talk unless it involves the job at hand or his contractor. He is astute and alert, taking extra care of being aware and ready for any signs of trouble.

Above all else, Johan is a warrior, and it's in battle where that part of him shines the most. His demeanor shifts almost immediately, his personality becomes cold and apathetic, showing no signs of emotion. He becomes completely and utterly focused on the fight with the goal of incapacitating, and at times killing, his opponents with complete precision and no hesitation. He will use whatever is at his means and disposal to win and while he prefers to fight honorably, he has no qualms in forgoing honor in favor of victory towards those he absolutely disdains and who would do the same in kind to him. He shows no remorse or empathy for the enemy; the only kindness offered to them being a swift and painless end.

The most notable personality about himself, however, is his resolve; his mindset of doing whatever needs to be done to ensure victory and to see things through to the end, even should they end badly. 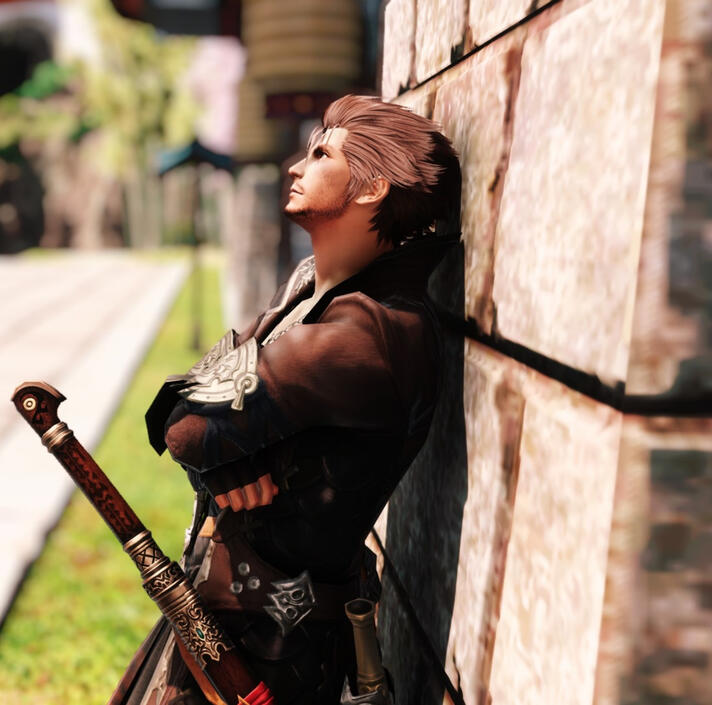 Johan was born in Dalmasca; his father was an Ala Mhigan adventurer while his mother was a tradeswoman. The latter died when Johan was young, leaving his father to raise the boy alone.

When he was three years old, he and his father fled Dalmasca due to the uprisings and encroaching threat of the Garlean occupation. They settled in Doma for a time, staying with one of his father’s comrades in arms from a time long since past, which is where Johan began instruction in the way of the sword.

Johan and his father remained in Doma for ten years before leaving again, returning to his father’s homeland of Gyr Abania. They lived in the outskirts of The Peak in relative peace, despite the fearful rule of Theoderic. But even with the mad king’s death, Ala Mhigo was barely afforded a respite before the Garleans came after, putting the whole of Gyr Abania under their thumb.

When he was eighteen, his father was killed by a Garlean patrol right in front of his eyes. And It was from this point on that Johan developed an intense hatred for Garlemald, and took arms with the resistance movement to free Ala Mhigo. Some time after joining, proving his worth and skill, he was granted a small squad which under his command, earned a number of victories against the Garleans, however small.

Despite the service of himself and his squad however, the resistance, and soon enough the whole of Gyr Abania, became disgusted by their tactics. They showed no mercy at all to the Garleans, killing their soldiers, unwilling conscripts, prisoners of war, even going after the loved ones of Garlean soldiers for leverage. Nothing was honorable or sacred to him when it came to the Garleans, as he wanted them to suffer as much as he did. One mission for the resistance, resulted in the deaths of women and children, and it was here that Johan began to see the horrors of his actions.

He repented too late however, and he ended up being betrayed by the people he fought so hard to liberate. He and his squad were led into an ambush where they, along with the Ala Mhigans who turned them in, were killed. Johan was the only one left, but instead of killing him, they took him prisoner and paraded him in shackles throughout Gyr Abania, before sending him to the Garlean homeland of Ilsabard as a conscript, forced to toil their lands as a slave. He was rescued by a group of Hrothgar and traveled with them for some time to repay his debt, along the way learning the methods of the Gunblade, before parting ways and returning to Eorzea.

• All the information on here is only known OOC, not IC
• Lore Flexibility: Prefer to stick to the lore whenever possible but have no issues with being flexible with one’s creativity so long as it makes sense and fits into the setting.
• RP Limits: No perma-deaths, no god-modding. Injuries, imprisonment, or anything else that could have longstanding consequences can and needs to be discussed OOC.
• RP Type: Somewhere between mid and heavy. Love immersing myself in my character(s) and interacting with the world and others, but real-life responsibilities limit my time.
• Preference: I can RP either IG or on Discord, though I usually prefer the former.
• Tells/Walkups are welcome

• Mercenary: A sword for hire, Johan is always looking to make gil, whether as a bodyguard, escort, or freelance soldier.
• Rebel: Were you a member of the Ala Mhigan resistance? Perhaps you crossed paths with Johan and worked with him. Or maybe you were a victim caught in the crossfire of his actions and deeds.
• Garlean: Perhaps you've butted heads against Johan when he was fighting for the rebels, or maybe you wish to test his ire.
• Traveler: A wanderer who has seen many places, he doesn't mind speaking of the places he's been to.

I've always enjoyed reading and writing stories, which is what made me interested in RPing in the first place; even though I've only been roleplaying for a little over three years now. I've RPed in other games such as WoW, SWTOR, ESO, GW2, and FFXIV. I live in the EST time zone and am usually available for RP anytime between 12pm and 2am( unless I'm working). Feel free to contact me IG or on discords and hope to make memorable events and stories with you all!